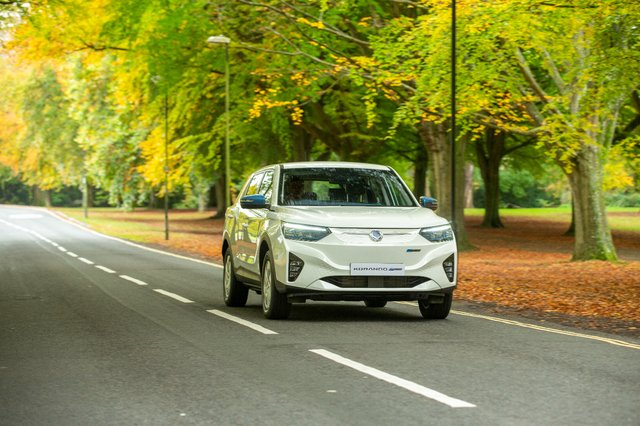 SsangYong recently created a bit of a stir with the first pictures of its upcoming Torres SUV.

The rugged looking model’s styling is quite a departure from the Korean brand’s existing line-up, bringing a new boldness and apparent step up in interior styling.

But just as notable as its looks is the fact that SsangYong – known for its tough diesel-powered off-roaders – will only be bringing an all-electric version of the Torres to Europe.

Details of the electrified powertrain are still thin on the ground but when it goes on sale in late 2023, the Torres will become the brand’s second EV, joining the electrified Korando and sitting between it and the diesel-powered Rexton in the range.

Until it arrives, SsangYong’s EV focus remains on the Korando e-Motion, which goes on sale later this year.

As the pun-tastic name makes clear, this is an all-electric version of the existing Korando, a wallet friendly C-SUV alternative to the Suzuki S-Cross, Nissan Qashqai and MG ZS.

Visually, the most obvious difference between the e-Motion and ICE Korandos is the blanked-off front end. In place of the regular grille there is a smooth “spread wing” panel sitting between redesigned LED daytime running lights and above a reshaped front bumper. Stacked LED fog lights are also unique to the e-Motion as are the rear bumper design and  blue trim highlights around the car.

That blue motif is carried inside the vehicle, where it replaces the regular car’s neat 3D effect on the doors and dashboard. Apart from that and blue highlights on the digital displays, the electric version shares its interior with the petrol and diesel versions. That means a solidly middle-of-the-road design and ambience. In look and feel the Korando is a step above a Suzuki or Dacia but not on a level with Nissan or Kia. There is plenty of space for four adult passengers to get comfortable, and you’ll get five in as long as you’re not planning any long trips. Impressively, the EV version doesn’t sacrifice any of the boot space, which remains a very useful 551 litres.

So far, so similar,  but the main point of the e-Motion is its powertrain. The biggest weakness of the current Korando has long been its engines. You have a choice of a reasonably refined but pretty uneconomical 1.5-litre petrol or a rougher but not much more economical diesel. So the introduction of an electric powertrain is a bit of a blessing.

The Korando was designed from the start to accommodate an EV setup and here it takes the form of a single 187bhp motor driving the front wheels. Its power comes from a 61.5kWh battery (of which 55.3kWh is usable) which is good for 211 miles of driving in official tests. Once that’s depleted, owners can charge at up to 100kW, taking the car from 20% to 80% in a little over half an hour.

On the road, the motor provides the instant torque common to all electric vehicles, scooting away from standstill and maintaining decent pull all the way up to motorway speeds. The near-silence of the motor suits the overall refinement of the Korando, with just some tyre noise intruding at higher speeds.

Handling has never been the Korando’s biggest strength, but the lower centre of gravity provided by the floor-mounted battery actually helps give the EV a more secure feel than its ICE equivalents. This still isn’t a sporty machine, though, and the ride and body control is softer, and less composed than its most capable rivals.

Like most manufacturers, SsangYong has been hit by the global shortage of semiconductors, which has led to struggles getting the e-Motion to the UK. However, it is on its way, with prices starting at £31,995 for the ELX trim. As is the way with SsangYong, relatively low prices don’t mean skimping on the equipment and even entry-level versions feature 17-inch alloys, a 12.3-inch digital instrument cluster, eight-inch touchscreen with Apple CarPlay and Android Auto, reversing camera, dual-zone climate control, adaptive cruise control and a suite of active safety systems.

At the top end of that price range, you’ll start to find rivals from mainstream brands but overall, only the MG ZS EV and Kia Soul EV offer comparable specification and abilities for similar money and both are smaller vehicles, leaving space for SsangYong to carve itself a niche in the growing world of EVs.

Drinking coffee in this heat won’t dehydrate you, says nutritionist