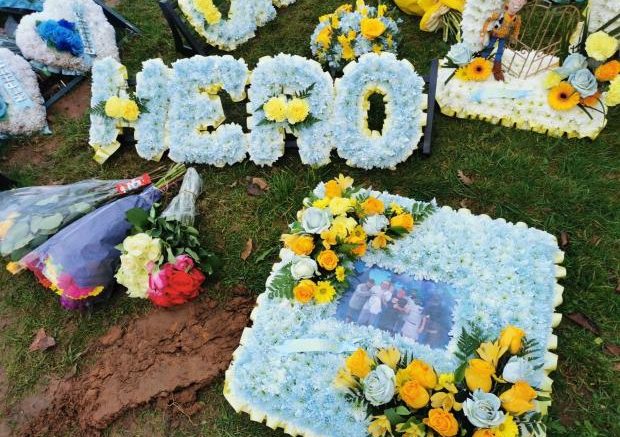 THE FUNERAL for brave warrior Carson was held on Thursday (November 26) after he lost his three year heart battle last week.

Carson Adams, three, from Blackburn, was born with congenital heart disease, meaning his heart was on the wrong side of his body, meaning he had to have open heart surgery at just three weeks old.

After being told on Monday to prepare for the worst, the family spent every last second with their brave warrior until he lost his life, just before 7pm on Tuesday.

The funeral was a beautiful event, with yellow and blue flowers – Carson’s favourite colours – lighting up the grave yard where he was laid to rest.

Carson arrived in a horse drawn carriage which again was filled with yellow and blue in tribute to Carson.

The family also organised a balloon release which saw dozens of white dove balloons and coloured balloons released for Carson.

Speaking on behalf of the family, Carson’s auntie, Cayla Adams said: “As heartbreaking as it was, it was a beautiful day, and a comfort to see so many people putting in so much effort for our boy.

“Yesterday shown us how many people loved Carson, and it was lovely to see everyone come together and give him the send off he truely deserved.

“We would like to thank each and every person for the tremendous efforts carried out on Carson’s final journey, the people who lined the streets, stood in the church grounds and people who attended the cemetery, and decorated the streets for him.”

“Morrison’s Blackburn for their continuous support throughout Carson’s journey, Father Barry for a beautiful service and continued support, to Karen Anne who sang.

“We have been undated with messages of support and it really means a lot to our family, Carson was a very special little boy who will never be forgotten, he touched the heart and soul of thousands of people.

“He was so special and was here for a purpose, we want everyone to remember how brave, courageous and beautifully strong he was till the very end.”He will live on in us all.”

In September, his family set up a Facebook page called ‘Carson’s journey the Blackburn heart warrior’ which has more than 8,000 followers, with thousands from all corners of the globe having followed the toddlers journey.

Community group, Shad Chefs have also helped to raise awareness of Carson’s condition and participated in numerous charity events to raise money for his family.

In a facebook statement on Thursday, Shad Chefs said: “A beautiful service for a beautiful young boy.

“People lined the streets for our boy Carson today and blue and yellow was the theme of the day.

“Blackburn has done this boy proud today, just like he did us. Rest in Peace beautiful Warrior. It was an honour to know you”

The service was held at Our Lady of Perpetual Succour Church on Holmebrook Close, Higher Croft and was live streamed to allow people to pay tribute while adhering to Covid-19 guidelines.