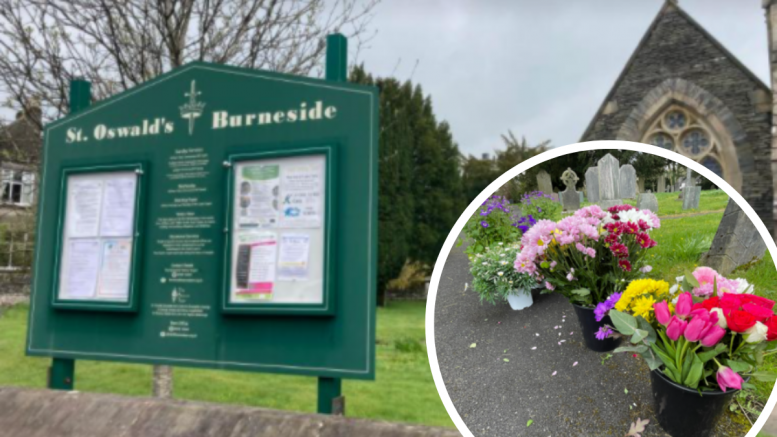 BURNESIDE residents have welcomed a wave of donations of fresh flowers for grave stones following the decision to have all headstones stripped.

Families were left in shock after flowers and ornaments in the St Oswald’s Church yard were removed by the wardens citing rules that had gone unenforced over the years.

The action triggered an intense backlash, but it also promoted action by members of the resident’s association, as well as local individuals and businesses to provide flowers to replace those taken.

Gayle Howarth, of the Burneside’s Residents Association, has welcomed the donations and hopes they can bring some comfort to those affected by the situation.

She said: “We are still waiting for the church to find a day to meet but in the mean time we have had discussions on supplying flowers for residents who need help.

“Fresh flowers often only last as long as two days and the weather doesn’t help.

“We have received an incredible donation from Alan McDowell from Kendal’s B&Q.

“The resident’s association has been trying to supply flowers in the community, and we placed a bucket at the church where locals have been leaving fresh flowers for the graves that don’t have any.

“Residents have been topping them up a lot and the bucket has been filled by local people.

“I’m not sure how many have been donated so far but it’s been going on for the past two weeks.

“It brings people some comfort to people, and people who live far away only found out after it had happened and they asked us to place flowers on their relatives’ graves.

“There is a lot of green waste and plastic waste because of this but we make sure it is all collected.

“From the point of view of the association it’s been fantastic to see people in Burneside stepping up when it matters, and it matters for the people living here.

“We have also had to refer people to grief counselling over this situation. Originally the church would have been the place for that but now some people feel they can’t go there.”

Local resident Rosie McNamara who was part of the community’s initial response against the removal of the flowers has praised the association for their devotion to the residents.

Rosie said: “There have been some great donations from B&Q and Greenbanks who have both really helped us out.

“The church vicar did provide two buckets of flowers over the Easter break of roses and daffodils. I put them on a few resting places for people who don’t visit the area often as they live far away.

“We also have two memorial stones in the graveyard. Two young lads who fought in WW2.

“To take the flowers off those graves, or any grave is very wrong.

“Unfortunately, the flowers don’t last for long, only a few days, often less because of the cold and heat.

“We are very grateful for the people at Greenbanks who heavily discounted flowers for us, and the people at the Resident’s Association, particularly Gayle, Gill and Trisha who have done so much.

“They have been so super and so humble; they never want any recognition for the things they do but they do everything out of their own pockets.

“A majority of the things they do they need a fundraiser to do.

“They are also providing people with financial support to buy flowers, and bereavement support. It’s all confidential.

“They do so much.

“We do hope to resolve the situation with the church when we meet with them.”