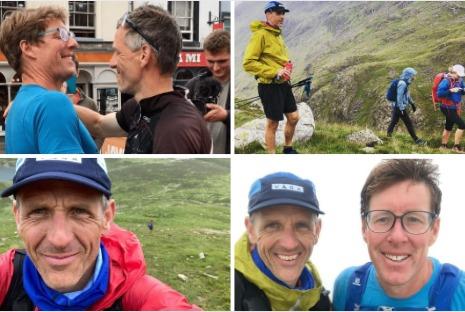 TWO adventurers set out to raise £10,000 for three Cumbrian charities by completing a challenge that has never been conquered before.

Kirk Wadsworth and Tim Jenner, both from Milnthorpe, took on the Cumbrian the Bob Graham, Frog Graham, and the Fred Whitton challenge.

While Tim suffered a knee injury during the route, Kirk was able to complete the feat in less than 60 hours.

The pair began their journey at 6am on July 22 and Kirk completed the challenge on Sunday.

The venture was done to raise money for Jigsaw children’s hospice, Keswick Mountain Rescue and The Brathay Trust.

They both completed the 40-mile Frog Graham Round route over 18 peaks, which also included a 15,500ft climb, and swimming two miles across four lakes.

On just three hours of sleep, they took on the Bob Graham Round. This involved a 66-mile run over 42 peaks and climbing 27,000ft in 24 hours.

Unfortunately, Tim was forced to bow out after he was injured after they reached Skiddaw.

Kirk said: “It was a bit of a mad weekend.

“There weren’t many negatives about it, apart from Tim’s knee injury. That was a real blow.

“He’s a strong swimmer and he’s done the channel before and we hoped the swim would give him time to recover, but when we got to Skiddaw it reactivated again.

“I feel great now. Some of the longer trainings run left me feeling sore, but now I feel fine.

“Having a massive ice bucket in the van between each stage helped me get through it. Having three minutes in the ice was good and the cycling helped get all the niggles and lactic acid out of my muscles. If it had been in a different order, I might have had a bit of a wobble.

“I expected to be a bit of a beating but no injuries and I feel really good.

“I’ve never done anything like this before. It’s another level. While me and Tim have done the Bobs before, we did them as individuals and we helped each other on those.

“Tim and I have known each other for six years since we worked at the same boarding school. He’s an awesome guy, really chilled out and calm.

Tim said: “We’re creeping toward our target of £10,000 for the three Cumbrian charities.

“Kirk did really well on this whole thing. The pair of us enjoy running, swimming, and cycling in the fells and together we thought we’d combine the three tradition challenges and raise as much as we could.

“It has never been done before and it was difficult to get your head round how far it really was.

“There were tough conditions, 50 mile an hour winds and horizontal rain.

“We had a great team supporting us who were there at 2am in the rain to get Kirk feed and carry his water.

“When we were about two thirds in at the Bob, I twisted my knee which slowed me down. The next day it hadn’t healed and it was the sensible decision to stop.

“I got in the car which was used to support Kirk so I was so happy to be part of it all.”

Kirk added: “While we’re in the front end of the camera, there are dozens of people behind it who got up in the middle of the night to get wet for six hours and bring us support.

“We had two professionals with us who gave their time free of charge.

“They got less sleep than we did. Thank you to all of them.”

For details of their journey visit TheCumbrian22.

Donations for each charity can be made at https://cumbrian22.co.uk/donate/.