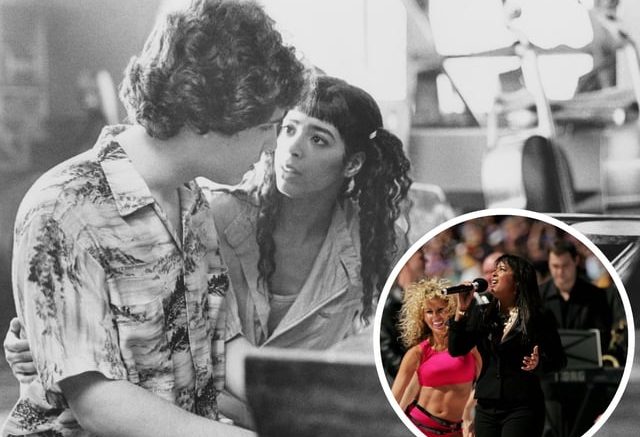 Bruno Martelli (Lee Curreri) tries to convince Coco Hernandez (Irene Cara) they should form a rock band, in a scene from ‘Fame’. Inset: Irene Cara performs before the AFL Grand Final match in 2006

Irene Cara – best known for singing and co-writing the theme tune to hit 80s movie Flashdance – has died, aged 63. The singer, who won an Oscar for iconic hit What A Feeling, passed away at home in Florida.

The cause of death has not yet been announced. Publicist Judith A Moose confirmed the news on Twitter, saying: “It is with profound sadness that on behalf of her family I announce the passing of Irene Cara.

“The Academy Award-winning actress, singer, songwriter and producer passed away in her Florida home. Her cause of death is currently unknown and will be released when information is available.

“Irene’s family has requested privacy as they process their grief. She was a beautifully gifted soul whose legacy will live forever through her music and films. Funeral services are pending and a memorial for her fans will be planned at a future date.”

She said the 63-year-old had been working on ‘amazing projects’ before her death. “Believe me, I wish it weren’t true,” she added. “We were working on amazing projects that would have made her and her fans incredibly happy. Her manager and I will finish them. She’d want that.”

Bruno Martelli (Lee Curreri) tries to convince Coco Hernandez (Irene Cara) they should form a rock band, in a scene from ‘Fame’. Inset: Irene Cara performs before the AFL Grand Final match in 2006

Before achieving fame for Flashdance, Cara trained in music, dance and acting as a child. She appeared in shows including Johnny Carson’s Tonight Show. After Flashdance hit screens in 1983, she appeared in films such as DC Cab and City Heat, as well as in live theatre and musicals.