A MAN who was caught trying to have sex with a cleaning cone at a train station two years ago has been jailed after he was seen exposing himself at the window of his apartment.

Trevor Smith had previously been spared jail in 2019 after a bizarre incident in which he was seen attempting to have sex with a cone in a train station lift.

However, Smith, 50, who appeared via video link from custody, was imprisoned today (Thursday) at Liverpool Crown Court after he pleaded guilty to exposure.

Smith was seen by a neighbour standing at the window of his apartment on Hall Street in St Helens town centre performing a lewd act.

There were a group of teenagers outside on the street at the time, the court heard.

READ > Homeowner ‘struck to head’ by burglars who broke into house

Prosecuting, Chris Hopkins, said: “The incident took place on the evening of March 18 this year.

“The defendant at the time was living in an apartment on Arrivato Plaza on Hall Street, St Helens.

“A witness, [who] was a resident in an adjacent apartment, at about 9.50pm heard a noise in the street.

“She leaned out of her window to see a group of about nine teenagers, male and female, who were walking along in the street and she then noticed the defendant hanging out of his window.

“She had seen him before, he was apparently well-known to other neighbours and she knew that he was called Trevor Smith.” 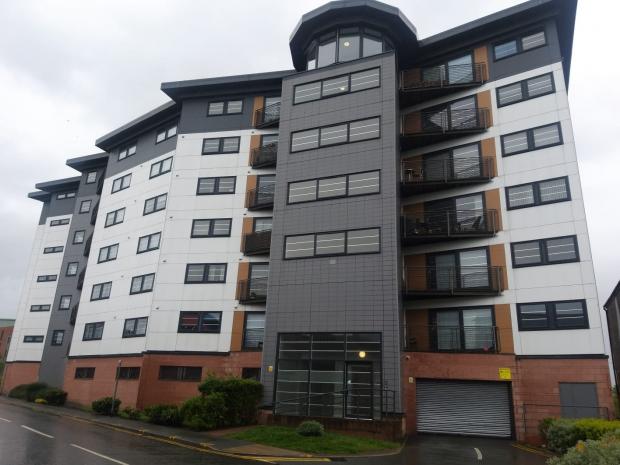 Mr Hopkins added: “She described he had one hand on his window ledge and was hanging over the window looking towards the group.

“She noticed that he stepped back down from the window ledge and he was fully naked with a pair of boxer shorts pulled down to his knees.”

The court was told the neighbour was “horrified and felt physically sick” especially as there was a group of kids walking past and Smith was looking out towards them.

Mr Hopkins said the neighbour phoned the police, describing it as a busy road and anybody could have seen what he was doing.

He added: “Police arrived at the flat and the defendant was now wearing a towel. He was out of breath [and] sweating. When they went into his bedroom officers searched and found a large amount of cannabis.

“One of the officers looked at his mobile phone and could see there was pornography visible on display on the phone.”

The court heard that Smith had a previous record, including for outraging public decency when he was seen in a lift at Wigan North Western train station with the cleaning cone.

He was given a 26-week sentence, suspended for two years at Bolton Crown Court in October 2019.

Smith also has two other similar convictions, relating to incidents in 2012 and 2016.

He pleaded guilty to possession of cannabis, exposure and breach of the previously imposed suspended sentence.

Defending, Mark Phillips said Smith lived on “the sixth floor” of the apartment and the incident took place “at night” and “the teenagers were unlikely to have seen what he was doing”.

He added: “He (Smith) tells me that he has had a look at himself this time while in prison” and that his offending is “in relation to drug abuse”.

Jailing Smith, judge Stuart Driver said Smith’s previous record and the fact he “focused on a group of teenagers” were “aggravating features”.

Smith was given an overall sentence of 10 months in prison.

A POPULAR Kirkby Lonsdale restaurant will be closed for the day due to electrical issues. The Westmorland Gazette | North Lancs …