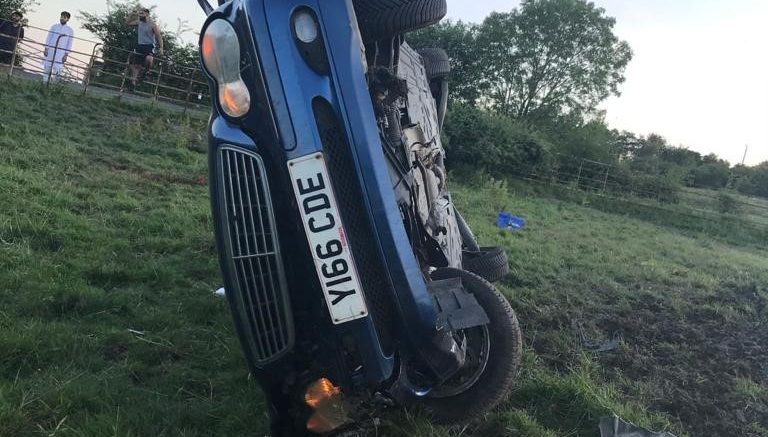 A CATTLE farmer has told of her outrage at reckless drivers crashing their cars into her fields – with the last one hitting one of her prize cows.

The Lancashire Telegraph reported yesterday how drink-driver Inese Glinska appeared in court after she crashed her Mercedes into fields off Clitheroe Road, Nelson.

The incident occurred at around 7pm on June 25 and farmer Sarah Seed said it was one of four such incidents at that spot in the last six months.

She is now calling for highways bosses to look at safety measures on the stretch.

Mrs Seed took these pictures after the June incident when the driver, wearing her dressing gown, crashed into the field just off the bend between Cuckstool Road and Clitheroe Road, injuring an award-winning show cow, Dawn, and damaging a fence.

Mrs Seed, of BCS Highland Cattle, who rents the land with husband Jimmy and their family, said she was outraged.

She said: “It has cost just over £10,000 to repair the damage for each vehicle that has hit or landed in our field.

“At the moment Dawn’s vet fees and foot trimmer fees due to her injury are still ongoing.”

She added: “We’ve only just had the fence done and we had to pay for it because the council wouldn’t.”

The cost of the damage is particularly acute for Mrs Seed’s family, given that they do not run the farm full-time and have normal jobs to support the raising of their show cows.

Since the cow was injured in June, yet another incident has occurred, and Mrs Seed, who has rented the land for the last eight years, believes irresponsible drivers who use a nearby stretch of road for races are to blame.

She said: “There was another incident last Saturday night where a car had hit one of our gates to the main entrance of our field.

“The gate is very bent and a new one has had to be ordered.

“This again is a loss out of my pocket not the stupid people who want to use it as a racetrack.”

She hopes that these latest incidents will spur the authorities into taking action to improve road safety in the area.

She said: “We have had to pay to get her insurance details due to lack of support from the police.

“We have had no support from Pendle councillors regarding the ridiculous speed limit on this road.

“We as a family are very saddened by this.”

A spokesman for Lancashire County Council, which has responsibility for highways in Pendle, said: “We would always urge people to drive to the conditions of the road, and this is a steep section of road with bends.

“Following the concerns of this resident we will also flag this up with the Lancashire Road Safety Partnership for their consideration.”

Pendle borough councillor Yvonne Tennant, however, confirmed that the authority was raising the matter with Lancashire County Council and hoped to be able to find a solution.

She said: “Whether it’s looking at the speed limit, installing speed bumps, we hope they’ll look at all ways of resolving this.”