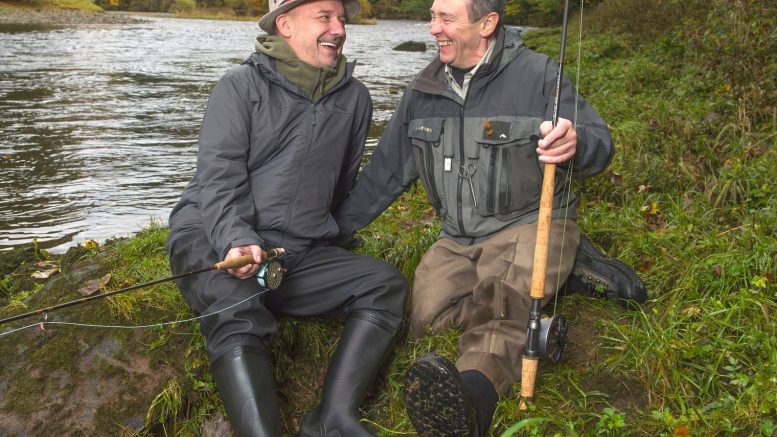 So it was positive nirvana to settle on the sofa last weekend and surrender myself to Mortimer and Whitehouse: Gone Fishing (BBC2, Sunday, 8pm) and Harry Hill’s World of TV (BBC2, Sunday, 8.30pm).

For this first episode in the third series of Gone Fishing, long-time pals Paul Whitehouse and Bob Mortimer were casting for salmon on the River Tweed.

The bosky sun shyly peeps over the hills, the fishing lines describe lazy arcs over the glittering river, and Bob falls over again, but this is a deceptive show.

At first impression, it’s a travelogue of scenic British beauty spots and glamping sites, but these two are such old friends that they soon get into the real meat of life – death, art, jam –and it’s a joy to be along for the ride.

Whether Bob’s feeling philosophical – “all artists are in this battle to try to be as beautiful as nature, and they never get there” – to channelling his alter ego Mystic Bob, Gone Fishing exerts a funny, heart-warming, silly pull.

It’s summed up by the subtitles right at the end – “Bob giggles. Paul laughs”. And so do we.

Harry, meanwhile, is back doing what he does best, marrying old TV clips with his sardonic, slightly surreal commentary. The researchers are the real stars of this show, finding bizarre clips from soaps through the years – the Brookside donkey, a sausage fight in Emmerdale, “two teas” in EastEnders.

Harry Hill, meanwhile, delved back into World of TV in his new BBC2 series

He’s absolutely in his comfort zone with this show, and you want to be in there with him.

The Unbelievable Story of Carl Beech (BBC2, Mon, 9pm) was almost as unbelievable as the title suggested, except Beech’s tales of a high-level paedophile ring were actually believed. A scary tale.

I’ve been catching up on series one of Dirty John (Netflix), the true crime anthology series which has a second series also streaming now. A bit trashy, a bit daytime, but strangely compelling, nevertheless.

Lancashire will be left with “crumbs from the rich man’s table” if devolution is derailed, county leader warns

A MOTHER-OF-FOUR who was the victim of a horrific domestic attack has spoken out about her disappointment at the courts’ handling of her case. The Westmorland Gazette | North Lancs …

A 35-year-old man has avoided a lengthy jail sentence after breaking a baby’s legs in two places. The Westmorland Gazette | North Lancs …

We asked for your photos of the snow across Lancashire today – and you didn’t disappoint! Lancaster Guardian…