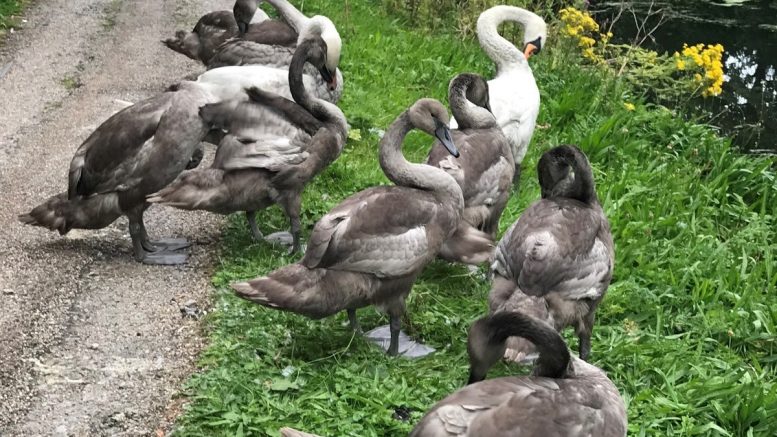 A FAMILY of swans were reunited this week after a mother and her cygnets (baby swans) were returned to the wild after being rescued from the canal just off Eden Street, Blackburn last month where they were found covered in an oily substance.

The mother swan and eight babies were first spotted doused in the potentially harmful liquid by a concerned member of the public who called the RSPCA for help.

Inspector Natalie Taylor was quickly on the scene and collected the birds, taking them to the RSPCA Stapeley Grange Wildlife Centre in Cheshire where have been kept until finally getting the all clear to be returned to the wild this week, where the male of the family was waiting for them.

Inspector Taylor said: “I was extremely pleased to be able to finally release the mum and her cygnets back into the wild with the member of the public who contacted us about them.

“It’s been a stressful time for the swans which were waterlogged from the oily substance and had been preening to try and clean themselves.

“They were bathed and treated at our wildlife centre and were also reunited with the male swan of the family.”

She added: “It is still unknown what the substance is but this has been reported to the relevant authority. Sadly, the canal is heavily littered so we would urge people to please take their litter home or dispose of it in the nearest bin as this can have an extremely negative impact on our local wildlife.”

The RSPCA has received more than 21,600 reports of animals injured or caught in litter over the past five years, including 609 in Lancashire.

More recently the charity has faced unprecedented challenges due to the coronaries pandemic.

If you would like to make a donation, visit: www.rspca.org.uk/covid, while if you are concerned about an animal that has been covered in oil or other contaminants, contact the RSPCA’s emergency line on 0300 1234 999.