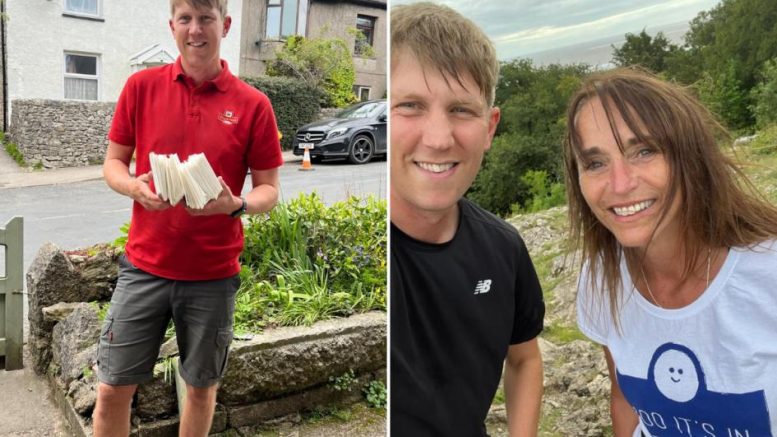 A SILVERDALE postman has been inspired by the heart-breaking experiences of a local family to undertake an epic running challenge for a suicide charity.

Tim Percival has raised more than £7,000 by running 100 miles in a week after receiving a very special letter from charity founder Angela Allen.

Angela, alongside family and friends, set up BAGs for Strife, a charity that supports those that suffer the devastating loss of a loved one to suicide.
She lost her 23-year-old daughter Katrina Fell in November 2019 and just eight months later, her husband Damian also took his own life.

One in every 100 deaths is a suicide so the charity ran a fundraising campaign asking people to do 100 things to raise awareness and funds.

Angela wrote 100 letters to people that made a difference to her, and Tim was one recipient.

Tim explained: “When Angela and her daughter Tash moved to Silverdale, they were really friendly and always had a smile for me, I had no idea what they had been through.

“When I received the letter, I was really surprised to hear her story and was impressed she’s stayed so strong and turned a terrible situation into a positive, setting up a charity to support other families going through extremely tough times.

“Running 100 miles across Silverdale and into the lakes was a real challenge for me as the most I’ve run in a week before is 45 miles but I was determined to make a difference.

“I want to say thanks for everyone’s support, it’s great to be able to raise so much, especially around Suicide Prevention Day.”

The name BAGS for Strife came from the common feelings that Angela, founder at BAGS for Strife, said families she had reached out to had experienced – blame, anger, guilt, and sadness.

Angela said: “We are so thankful to Tim for the money he has raised.
“These funds will support families and friends during such a stressful and difficult time.”

BAGS for Strife delivers care kits via emergency services, curated by those who have experienced suicide, and contain vital information to help families cope in those first initial days and weeks after a loss.